Happy happy Friday, friends, and what a glorious day it’s been! Today I had a chance to stop over at my old school and see some of my favorite former students as they prepare for their first day of school this coming Tuesday. So many bright faces and so much energy filled the halls as they set up their lockers. I kind of miss those days, or at least the idea of a locker space–a place to call your own and store your belongings so you’re not lugging your entire life around with you wherever you go. Cherish it, people! I imagine the closest thing to that would be having an office, but what about those college and graduate students who don’t have such a luxury? I suppose we have no choice but to bring our essentials, and today, I’m sharing my own! What are yours? Comment below!

END_OF_DOCUMENT_TOKEN_TO_BE_REPLACED

While driving into work yesterday morning, I was listening to Chicago’s KISSFM with Fred and Angie–per usual–and they were playing a game where callers in their early 20s phoned in and tried to name 1980s and 1990s sitcom theme songs. As I listened to these “youngsters” try and fail to name these tunes, I couldn’t help but realize a few things: 1) Since I’m at the end of my 20s, I guess I’m now old; 2) Since I could name every single tune, I guess I’m now old; and 3) Since I refer to the 1980s and 1990s as the “good old days,” I guess I’m now old. I’ve never really thought about my age, at least not negatively, but since turning 29 a few weeks ago, I have been feeling pretty nostalgic lately, especially when it comes to high school.

“It’s the oldest story in the world. One day you’re 17 and planning for someday, and then quietly, and without you ever really noticing, someday is today. And then someday is yesterday. And this is your life.”- Nathan Scott, One Tree Hill

When I was a sophomore in high school, the WB (now CW) premiered it’s latest teen classic One Tree Hill, and I was obsessed! I would rush to complete my assignments so I wouldn’t miss an episode. Basketball, brothers, complicated relationships, and incredible music? What more could a high schooler want? In the series’ nine years, they played nearly 2,000 songs (wow)! In fact, a Buzzfeed article reports that “music was such a huge part of One Tree Hill that the fictional club Tric was written into the show in Season 2 so the writers could feature more bands and artists.” Each carefully selected and meaningful tune appealed to teenagers turned adults because the songs and episodes examined real issues, captured the essence of teenage and eventually adulthood, and encouraged us to just be our true, authentic selves. I grew up with One Tree Hill, and while each episode isn’t quite as fresh as it is for those youngsters now binge-watching it on Netflix, the songs themselves have stayed with me, and for that, I am grateful. Be still, my emo, angsty, teenage heart. Here are a few of my favorites from the series:

END_OF_DOCUMENT_TOKEN_TO_BE_REPLACED

Whether you’re in middle school, high school, college, or beyond, one of the best parts about school is going on a well-deserved and much-needed break. From early September to mid-December, you work day and night for hours and hours on end perfecting projects, writing and revising essays, and studying for exam after exam after exam. Of course you’re exhausted–who wouldn’t be? And just when you thought you couldn’t handle anymore, the gates open up, the angels shine down, and the gods grant you a token for your hard work and dedication to your academics, athletics, and arts: a two-week vacation. While Netflix binges and sleep marathons are ridiculously appealing, try getting off your cozy couch (at least for a few hours a day) and consider spending your break more intentionally:

END_OF_DOCUMENT_TOKEN_TO_BE_REPLACED

Friends! It’s almost time to celebrate, toss your texts to the side, and kick up your feet. Hopefully, you’ve caught the Hamilton buzz and have been “writing day and night like it’s going out of style.” If you too find yourself just “non-stop,” remember to take a much-needed break between your studies. Breaks are scientifically proven to improve your focus and productivity, but you have to make sure you’re selecting effective study break options that will help you reenergize and refocus. While watching Netflix or playing video games are easy go-to’s, they won’t give your brain the rest it needs to recover. Remember to schedule in five-minute breaks after 30-60 minutes of studying. Here are 10 suggestions to help you optimize your study breaks:

END_OF_DOCUMENT_TOKEN_TO_BE_REPLACED

Happy Tunesday, friends! Finals week is officially here, and we couldn’t be more thrilled to get to winter break, but before we get ahead of ourselves, there’s more studying and essay writing to do. So, to help you make it through those late night sessions, calm you down, and stay focused and productive, take a listen to these study-approved songs, all recommended by my students. Whether or not you include these tunes on your study playlist, remember to keep the volume low, avoid the hottest hits, and carefully select songs that won’t distract you from your studies. Plan it out: use a website that will generate a playlist for you, or use a pre-made study playlist of music or ambient sound from Spotfiy, Apple, Pandora, or YouTube. What songs do you listen to while working? Comment below! Without further ado and in no particular order, here are their suggestions:

END_OF_DOCUMENT_TOKEN_TO_BE_REPLACED

Happy Monday, friends! For many of us, this is the last week before we enjoy a much-needed and well-deserved winter break, but there’s just one more hurdle to master, one more thing standing in the way of endless sleep and guilt-free Netflix marathons, one more thing keeping you from freedom: finals. They say it’s always darkest before the dawn, and here we are in finals week and it’s pitch black (metaphorically speaking, of course)! So, how will you survive? Check out my suggestions to help you power through and master your finals relatively unscathed.  END_OF_DOCUMENT_TOKEN_TO_BE_REPLACED

It’s that time of year again, friends. Acceptance letters have been mailed and received, and now you have the daunting task of making the biggest decision of your life. What’s more is that you likely feel as though this commitment means you’re signing your name in blood and have to give away your first born child. While it’s not that extreme, it is a pretty big deal. I’m sure you’ve made list after list, compared the latest college rankings on U.S. News and World Report, mulled over several options, and had a multitude of conversations with your parents, teachers, college counselors, and friends, right? Last year we gave you three tips to help ease the decision-making process. You’ve visited schools, weighed your options, and are (somewhat) trusting the process, now what? In case you’re still unsure of where you’d like to spend the next four years of your life, take a gander at three more tips and tricks to (hopefully) lead you closer to choosing the college that’s best for you!

END_OF_DOCUMENT_TOKEN_TO_BE_REPLACED

Every Sunday night, my high school principal sends a beautifully crafted email of encouragement and wisdom to the faculty. Of course there’s pertinent information as well, mostly updates and important dates to remember, but at the heart of her messages are words of inspiration—and this week’s was no different. Just three days ago, I received an email that reminded my colleagues and me of the importance of self-care. We’re one week shy of midterms (insane!!!), and finally halfway through the longest term of the school year. Faculty members have been trucking away like trains on a track, turning our wheels faster and faster, not breaking, not stopping, and not resting since we started orientation and planning week in August. We’re exhausted, sleep-deprived, dehydrated, famished, and probably a hop, skip, and a jump away from falling ill or quitting (whichever comes first, right?). We’re turning into zombies and pod-people—tiny shells of our previous existence. Okay, okay…maybe I’m being a bit dramatic here, but when we stop and take a moment to breathe and reflect deeply, we can start to see and feel what we’ve often been ignoring. And as I sit and consider my own thoughts and feelings, I can’t help but think about yours: how do the students feel?

END_OF_DOCUMENT_TOKEN_TO_BE_REPLACED

Kermit Says… is back, and we missed you all terribly! My team and I hope you had a fantastic summer and we’d love to hear all about it, so feel free to reminisce about your favorite parts and send them in so we can live vicariously through you!

Now, whether you returned to school nearly a month ago or, you’re like me, and it’s only been one week, summer vacation is o.v.e.r and a new school year has officially begun. I know, I know, no more days where you’re late-to-go-to-bed-and-late-to-rise. No more afternoons at the beach. No more ice cream until your brain freezes—well, maybe not that last one. The end of summer vacation means the end of a lot of fun things, but if we remain positive and optimistic, then this new academic year could mean the start of something new (yes, that was a High School Musical reference).

All jokes aside, a new school year provides another chance to be your best self. Heck, it’s a chance to reinvent yourself altogether. A new school year is like the first snow—completely untouched, fresh, new, pure, and ready for you to do with it what you will. You can either watch it from a distance and let it ruin your moment or you can make a plan of attack and (literally) dive in. How will you approach this new school year? What goals do you want to achieve? Where would you like to see yourself by the end of the quarter, semester, or year? Comment below or send an email to contactkermitsays@gmail.com.

Let’s make this new school year BETTER than the last! 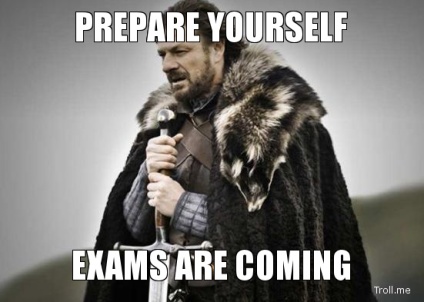 Remember, the best way to prepare for what can be a pretty stressful week is to approach it with a peaceful mind, calm spirit, and confident demeanor. You can do this! I believe in you, so believe in yourself.

Good luck with finals and have an AWESOME summer! You earned it 🙂

Looking for something? Don’t fear! This search bar is here!

Looking for something? Don’t fear! This search bar is here!